Knit Con at Pinterest is the moment I look forward to every year. I just experienced my third one and it never gets old. When the event schedule comes out, I flip through it like an excited college freshman flipping through a course catalog. Full of new ideas, full of possibilities. 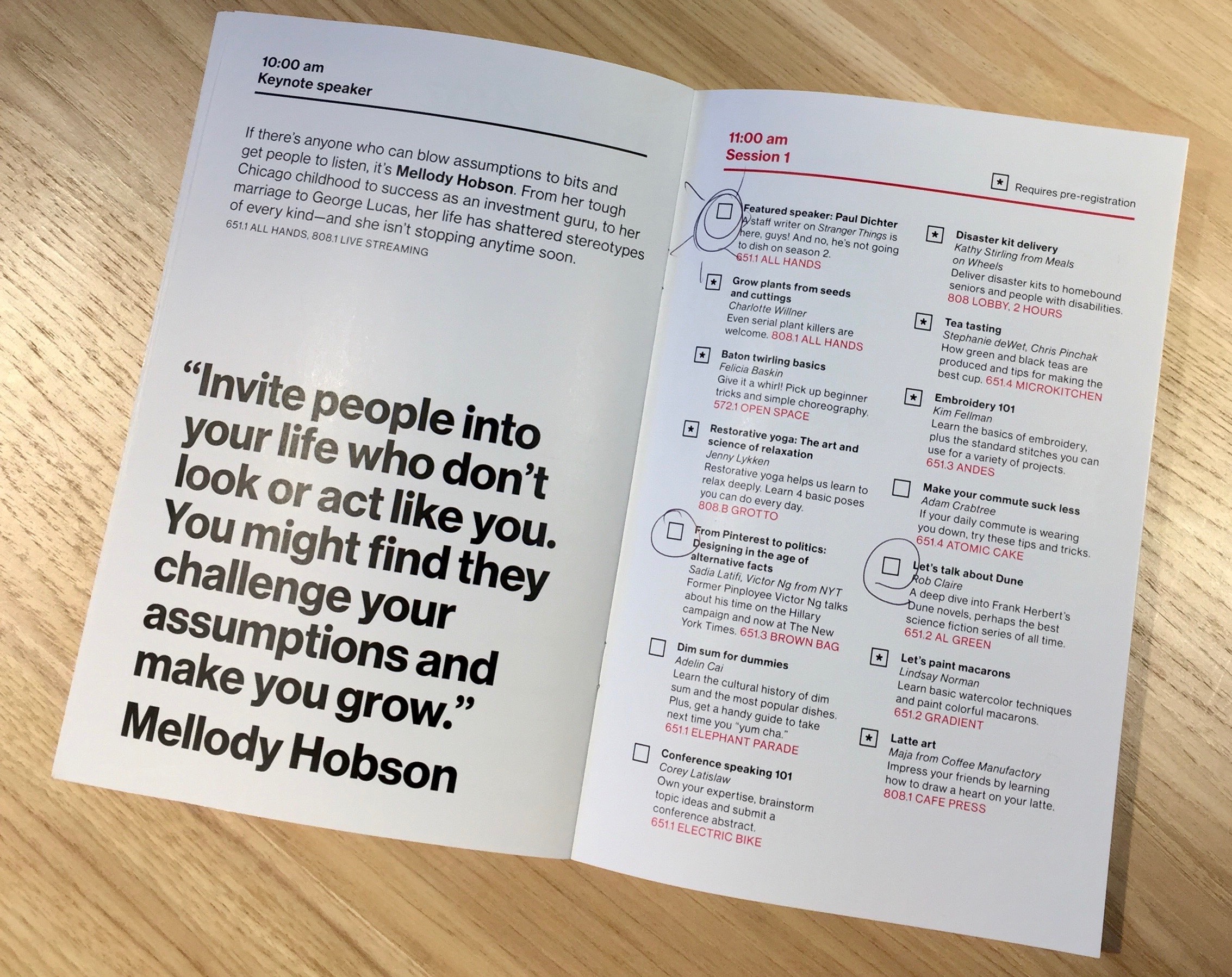 Pinterest helps hundreds of millions of people discover and do what they love, and it’s just as important we do that for our employees too. Our company is made up of talented individuals who are not only experts in their fields, but passionate about pursuits outside of the office. We look for people with more interests than time, people who genuinely get excited when they talk about creating and doing things in their professional and personal lives.

We have a core set of values at Pinterest: Put Pinners First, Go, Be Authentic and Knit. The last one is major. "Knitting" is when everyone works together, from engineering and design to marketing and community, to create the best experience for Pinners. True invention happens when different points of view are connected. This is how Pinterest was created, after all.

An inside look at Knit Con

One big way knitting is brought to life is through Knit Con. It’s a laptop-free, meeting-free event that takes place over the course of two days in the Pinterest offices around the world (San Francisco, New York City, Chicago, London, Sao Paulo and Tokyo). Employees show off and share what they’re most passionate about through hands-on workshops and classes. It’s basically an analog version of Pinterest.

Every year, I’m amazed and inspired by the hidden interests and secret superpowers of my co-workers. There’s way too many to list, but here are a few session highlights and pics:

- So hot right now: How to build a fire was a popular session led by Charlie Hale, our head of public policy and captain of his college timbersports team/competitive fire builder (yep, it’s a thing).

- People were stoked to see brand designer #1, Victor Ng, return. Victor left us for NYC to work on the Hillary Clinton campaign and is currently a designer at the New York Times. Writing manager Sadia Latifi hosted a Q&A with him called From Pinterest to politics: Designing in the age of alternative facts.

- Pinterest has always had a soft spot for Corgis, so everyone was pretty jealous of London’s training and petting session. 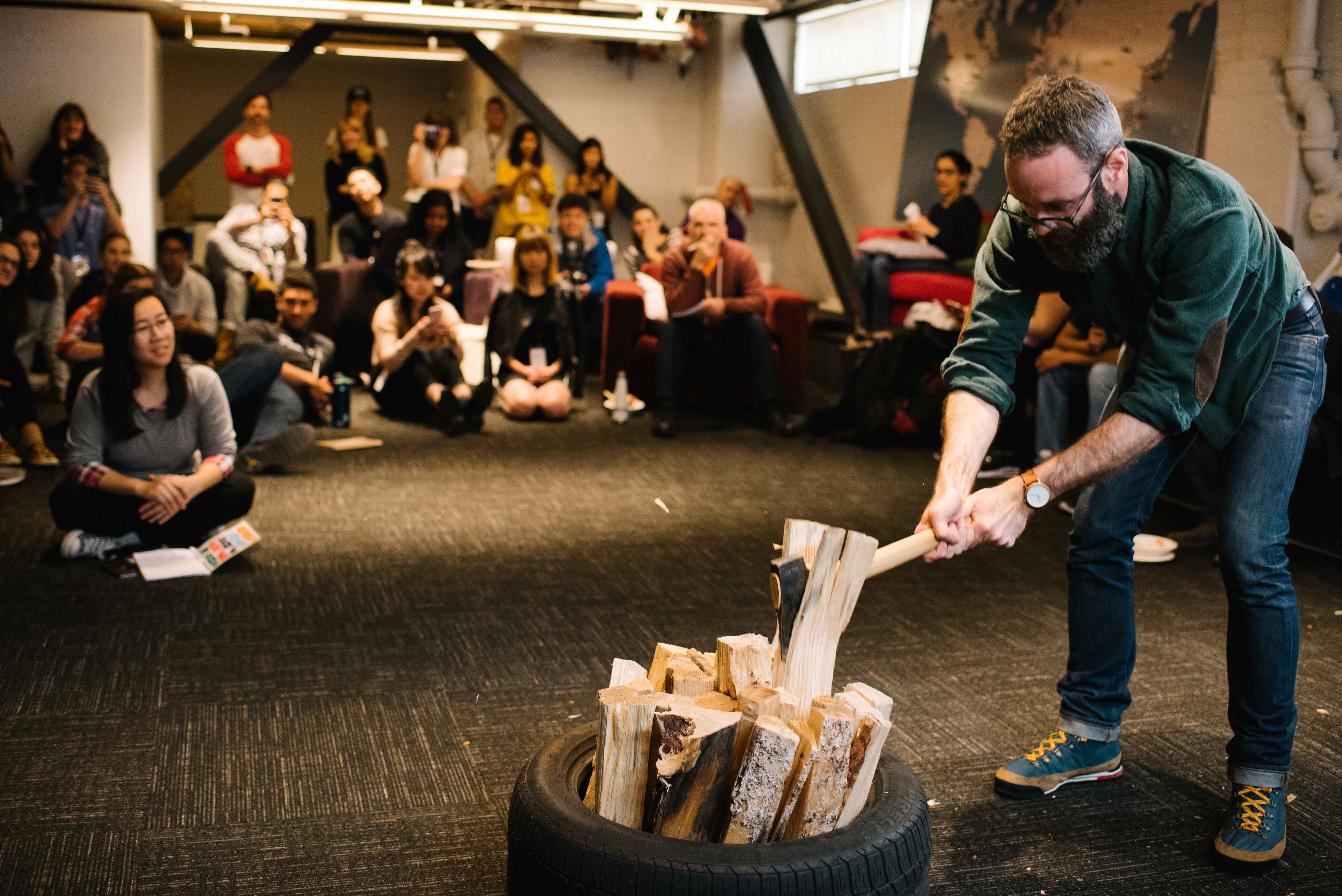 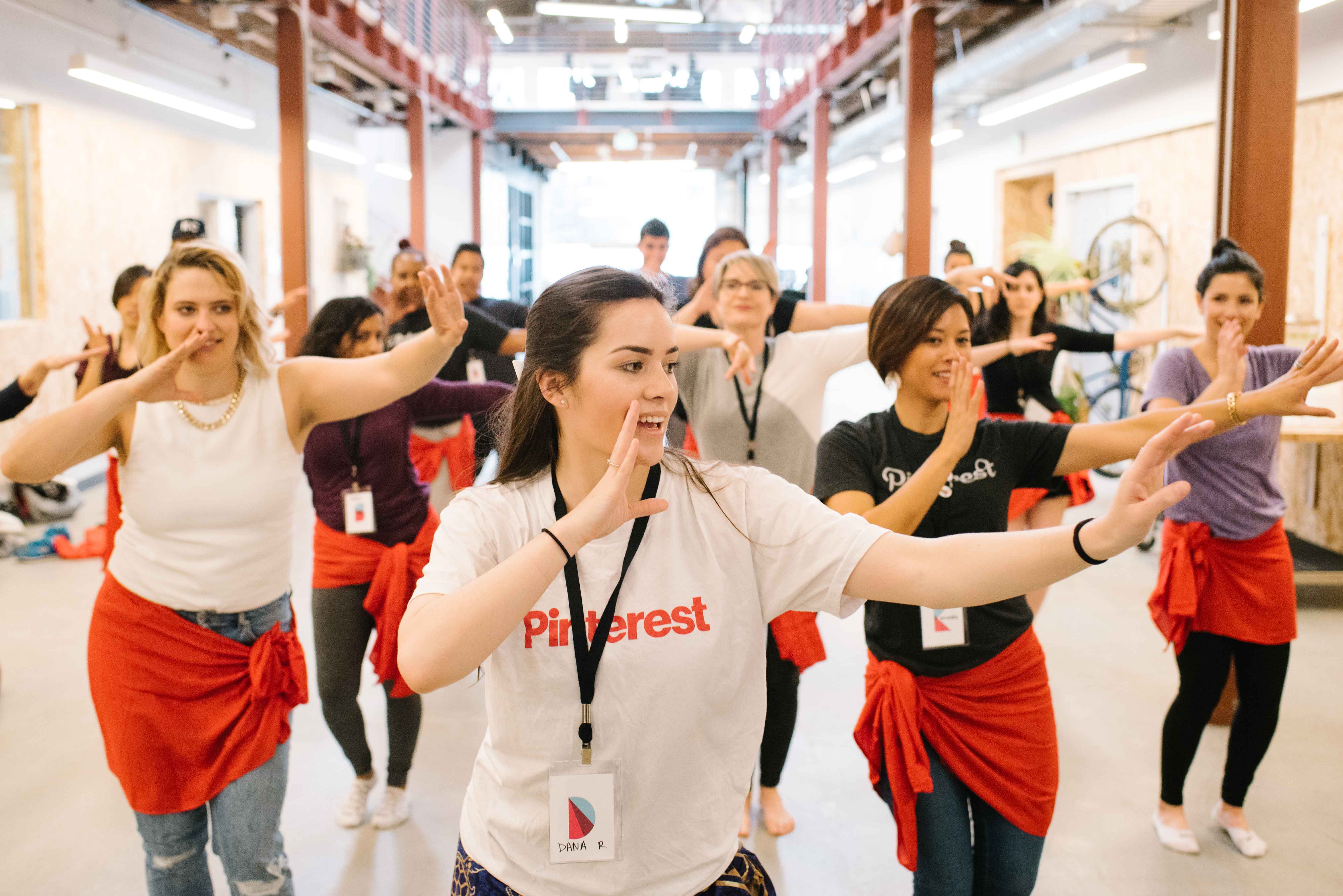 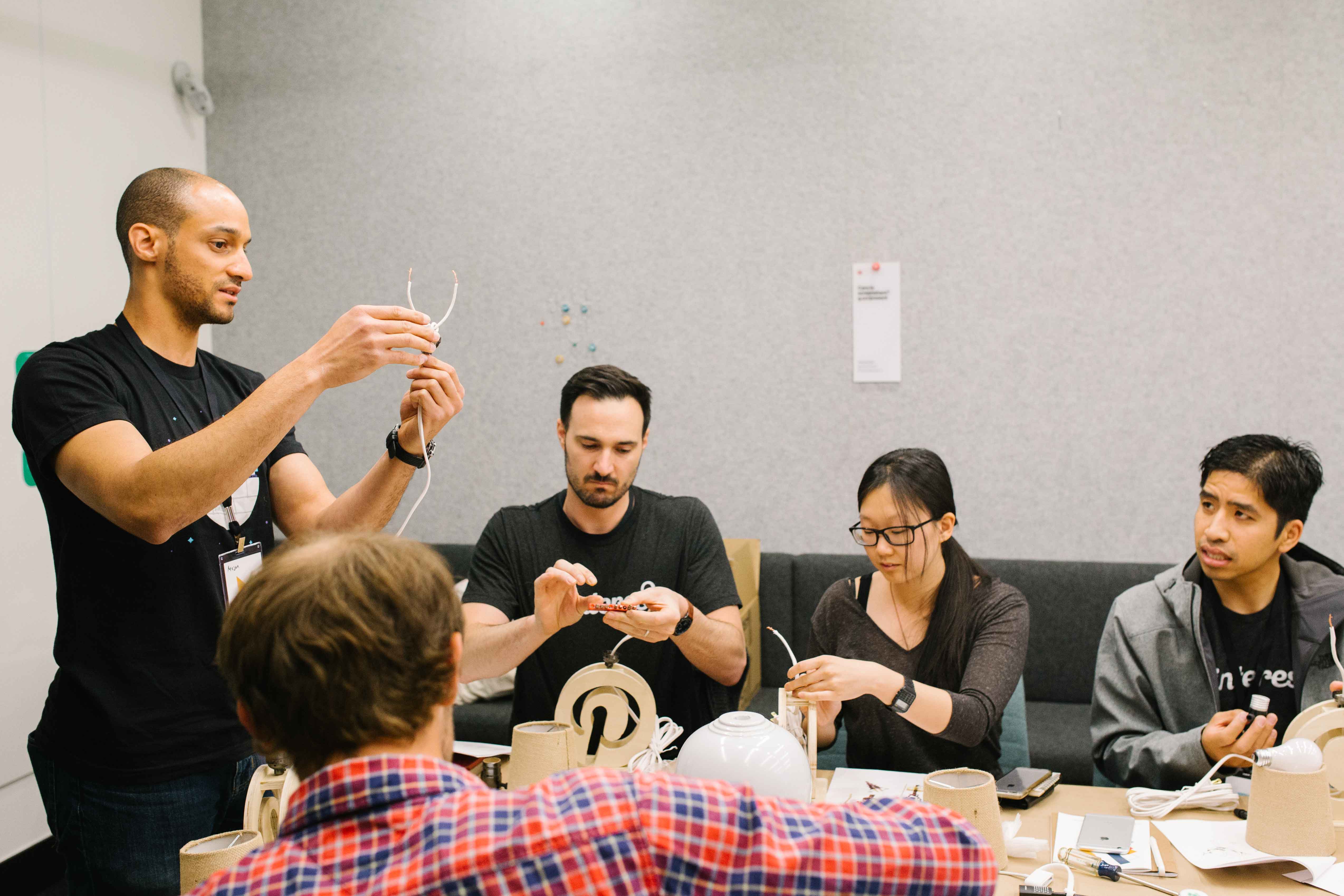 Mason Jennings demonstrates how to wire a homemade lamp 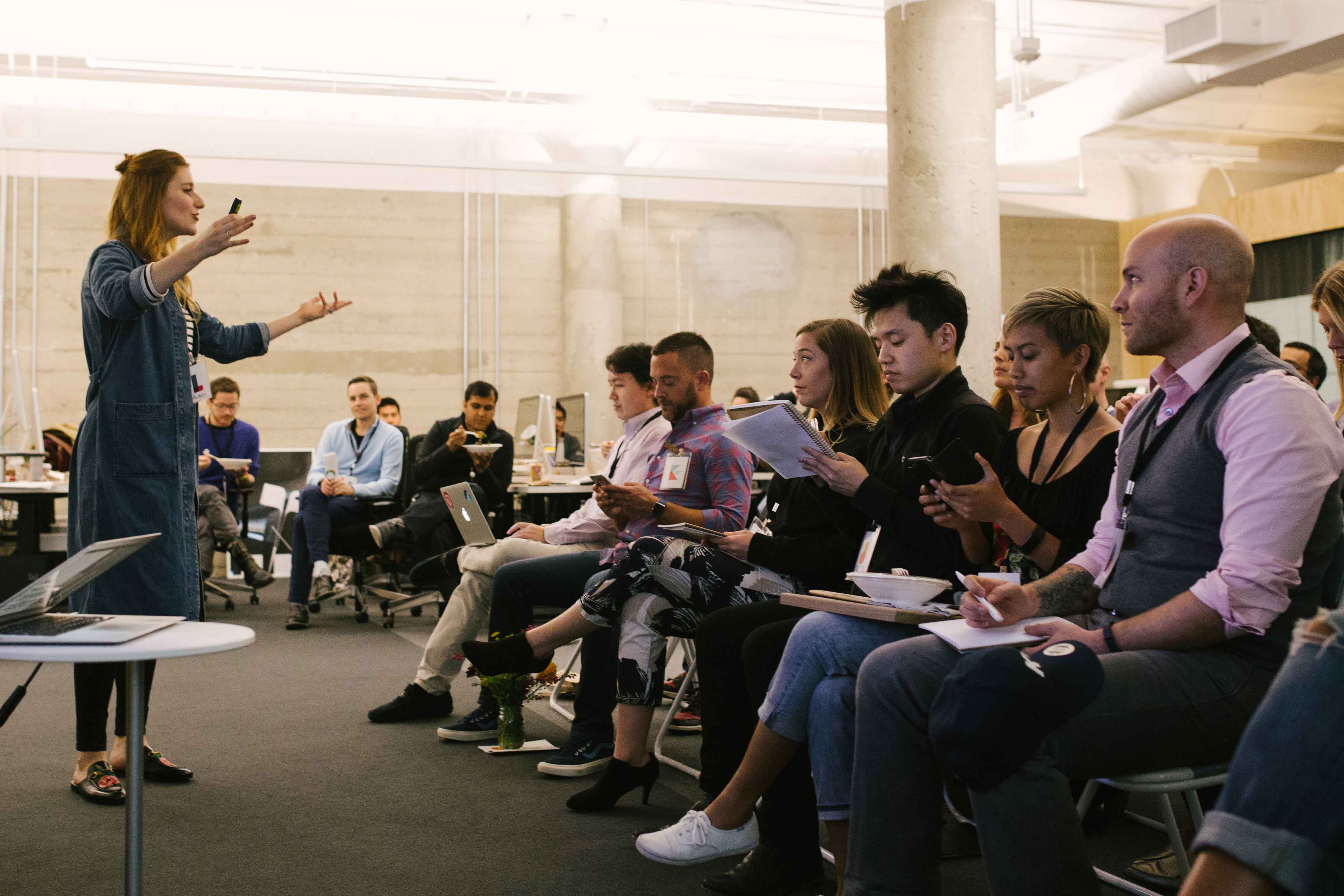 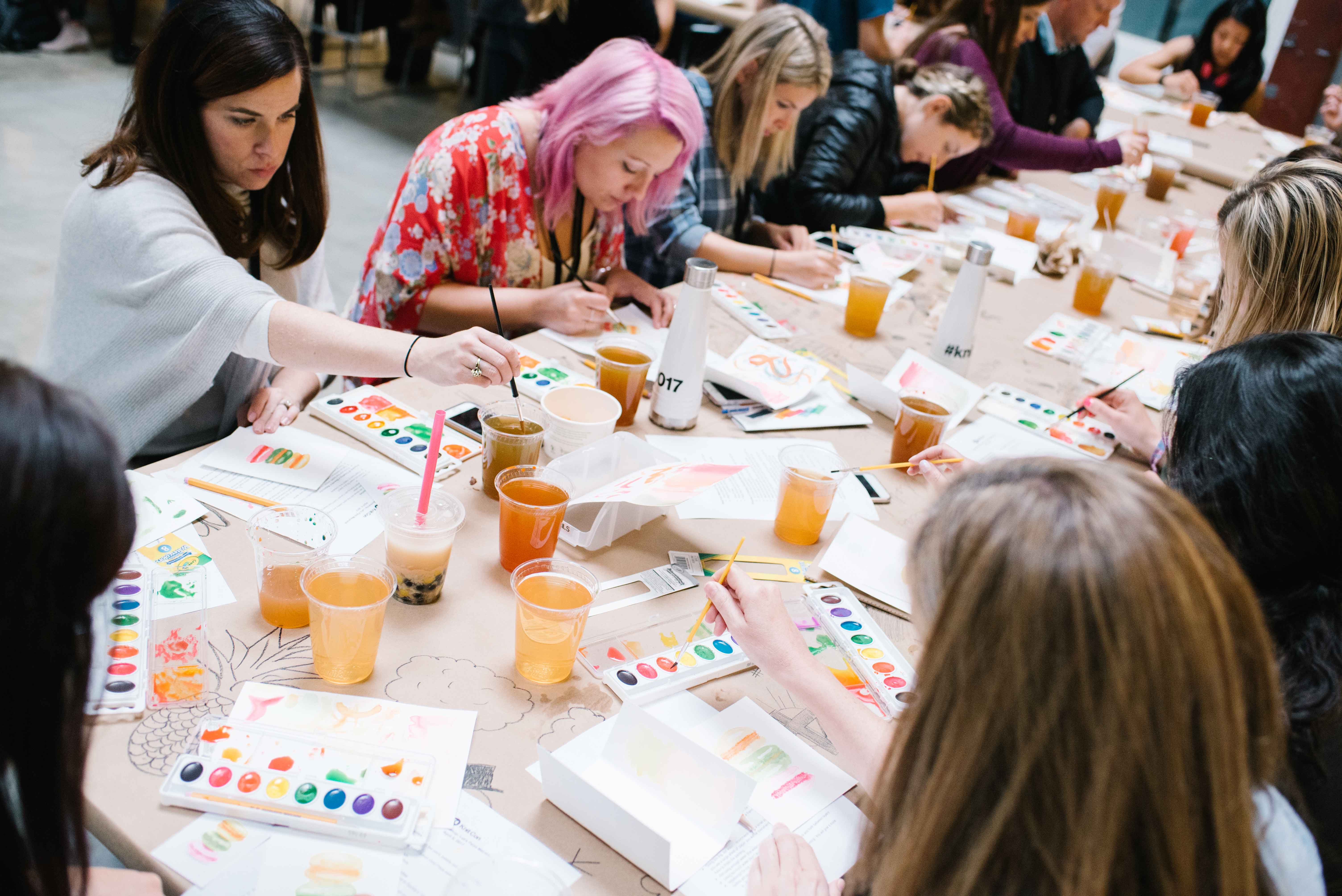 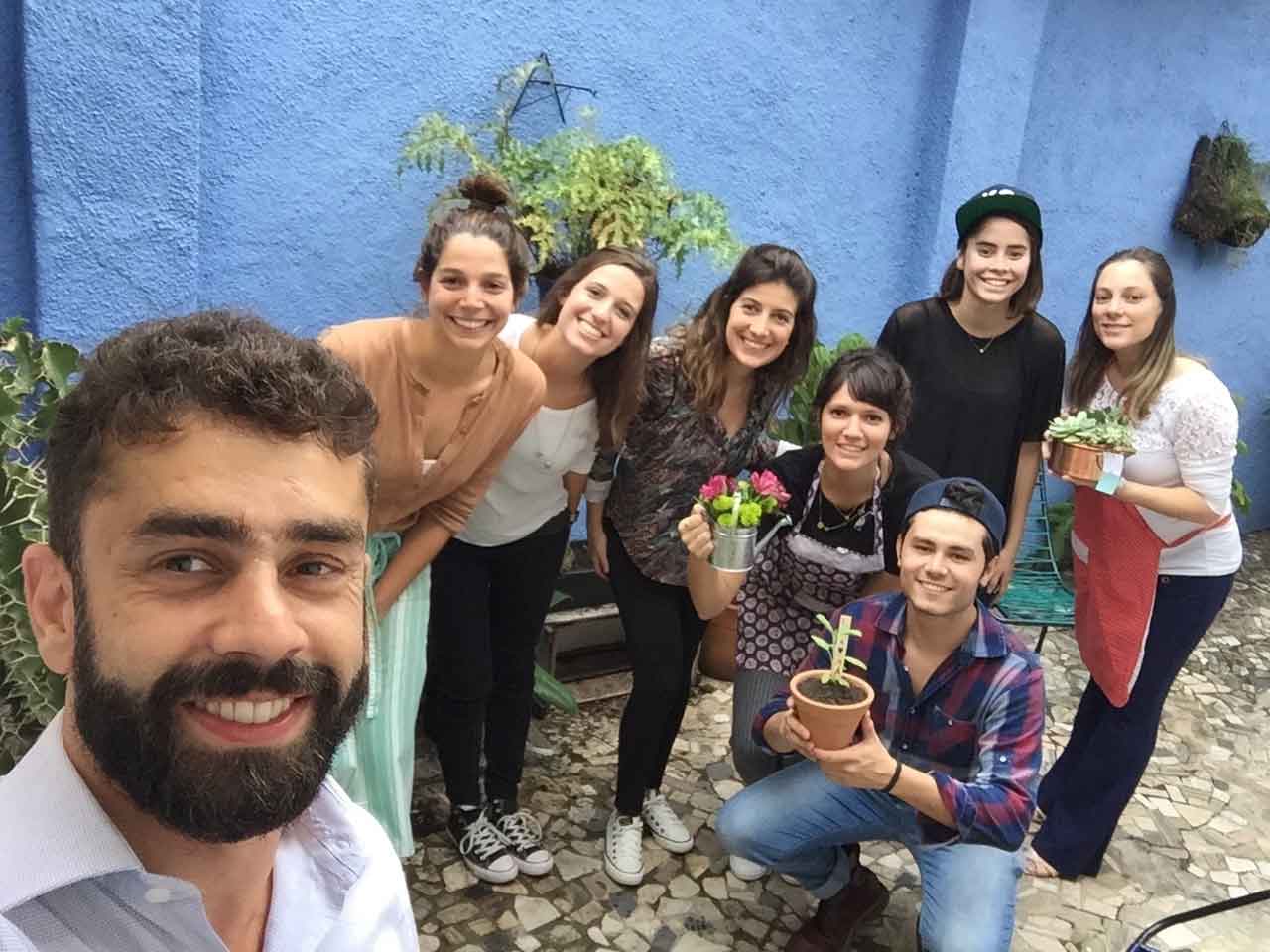 The Brazil team’s handiwork after a gardening how-to 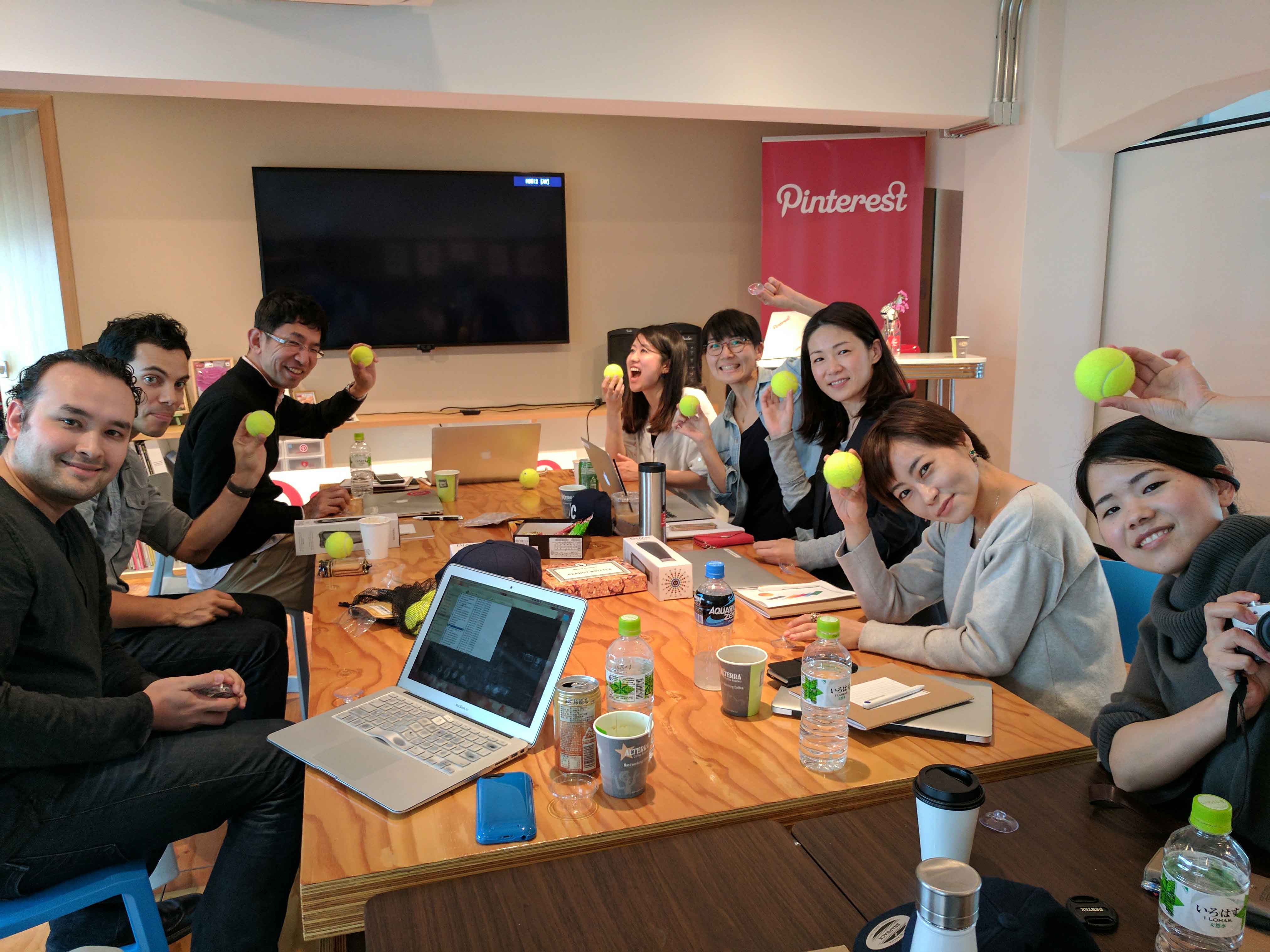 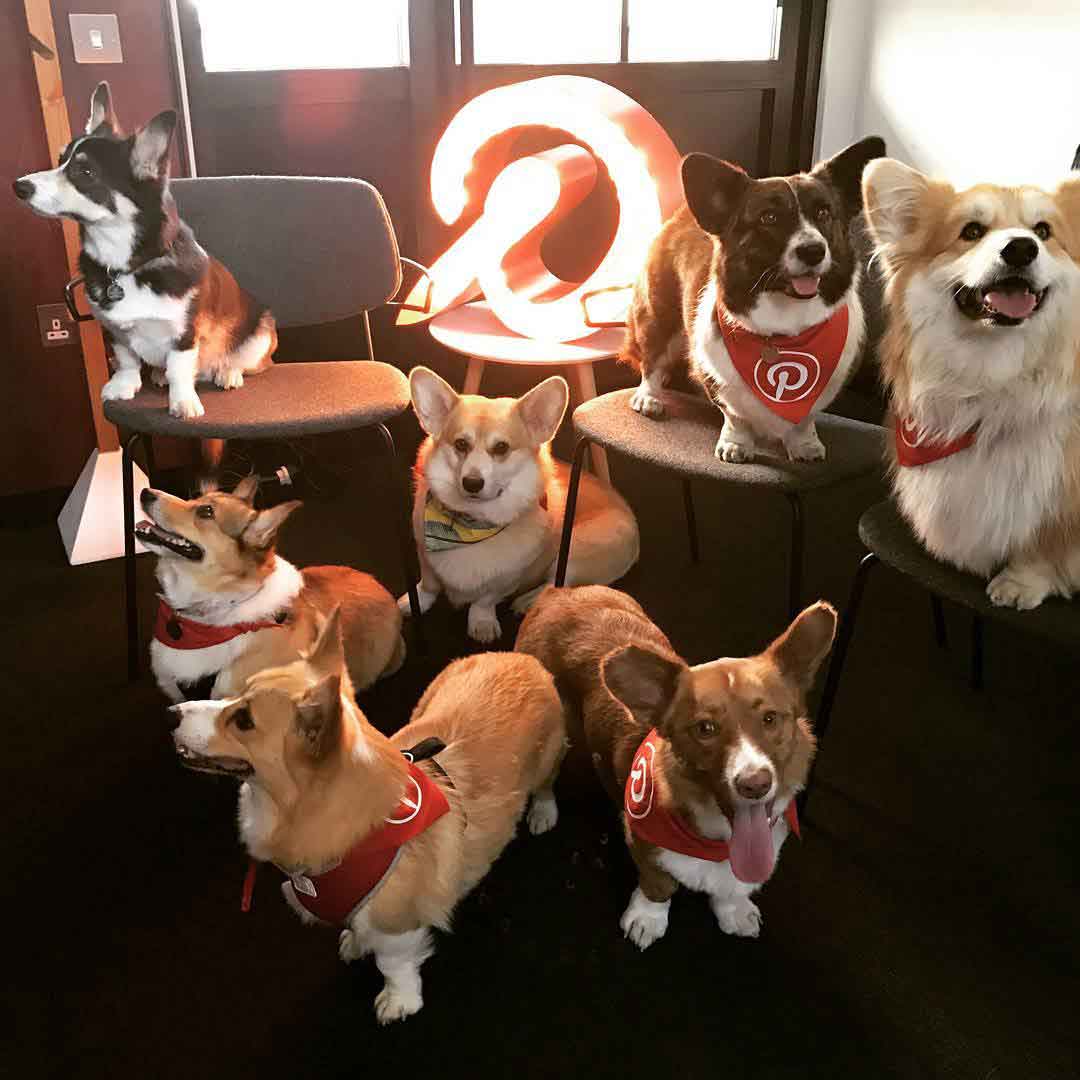 Corgis take over the London office!​

Besides workshops and sessions, we participated in giving back to the community.

- The New York City office made children's costumes to support Only Make Believe, an organization that puts on performances for children in hospitals.

- San Francisco partnered with Meals on Wheels to deliver disaster kits to homebound seniors and people with disabilities.

- Chicago rolled up their sleeves and cleaned Ward A. Montgomery Park. 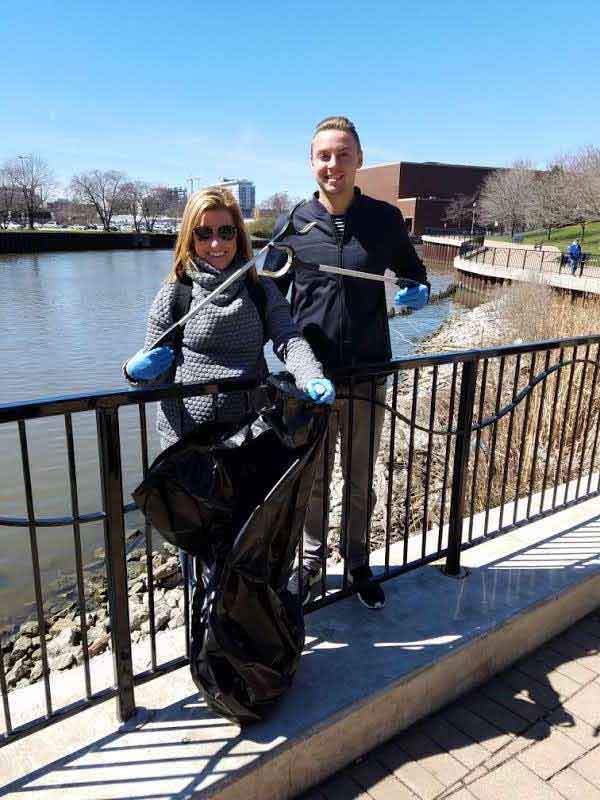 Two members of the Chicago team help clean up Ward A. Montgomery Park

It was a real treat to hear keynotes from industry professionals, celebrities, athletes and legends. These were two of my favorites:

- Chris Mosier, the first openly transgender athlete to make a U.S. national team said about Pinterest, “I very much was creating an image of the person I wanted to be.” We all burst with emotion and pride in that moment.

- Mellody Hobson, President of Ariel Capital, talked about how she strives to make her company truly unique and encourages “No me toos.” This week, I saw “no me too” signs around the office that the brand team made. 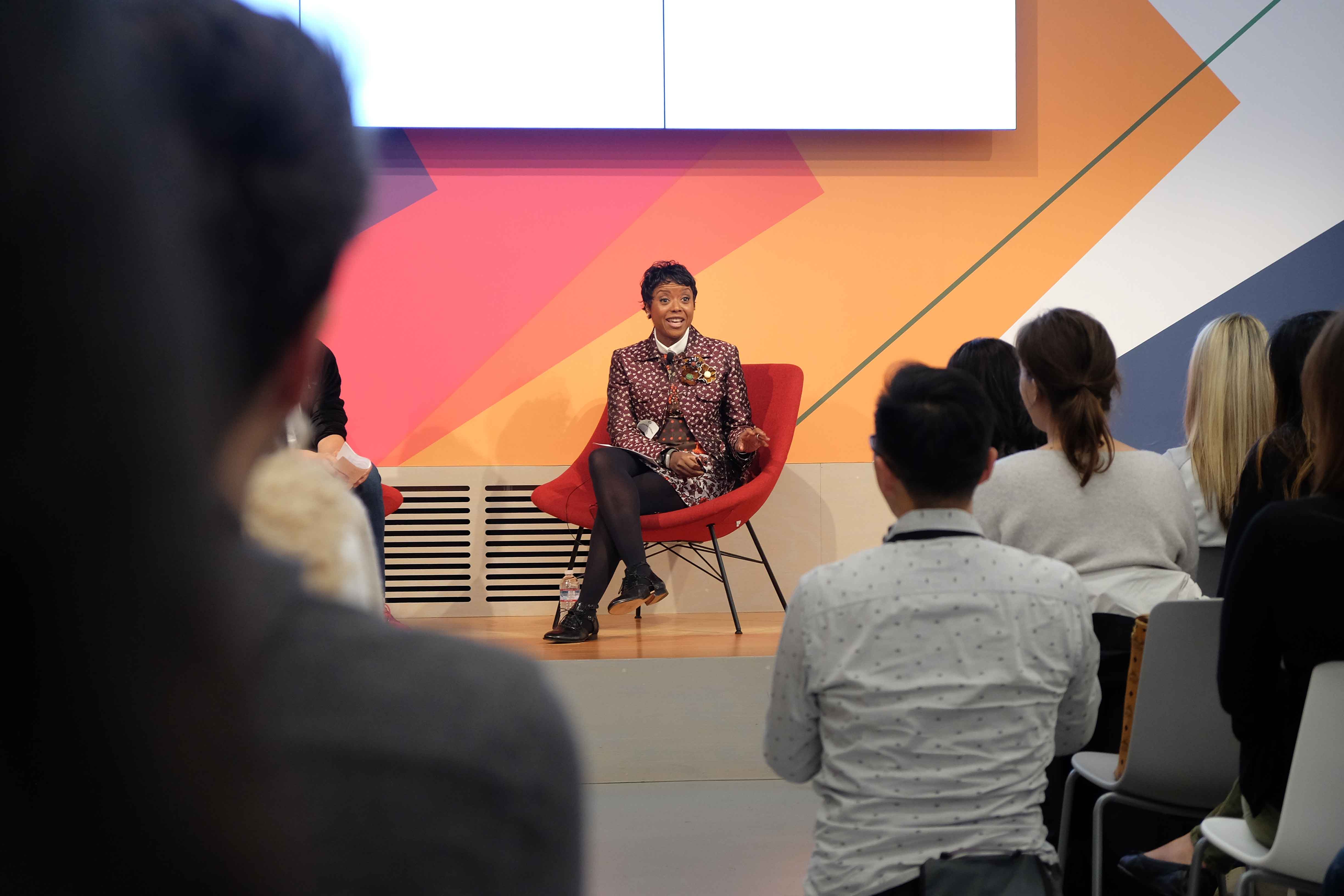 Mellody Hobson, president of Ariel Investments, knocking our socks off

Knit Con is run like a tight ship with everything scheduled down to the minute, but sometimes fun stuff just happens. Knit Con Underground was a new movement this year, unscheduled and spontaneous, where pop up sessions were announced the day of on Slack. A few favorites were beatboxing, tarot reading and Dungeons & Dragons, which of course, Stranger Things staff writer Paul Dichter joined after his mainstage talk. 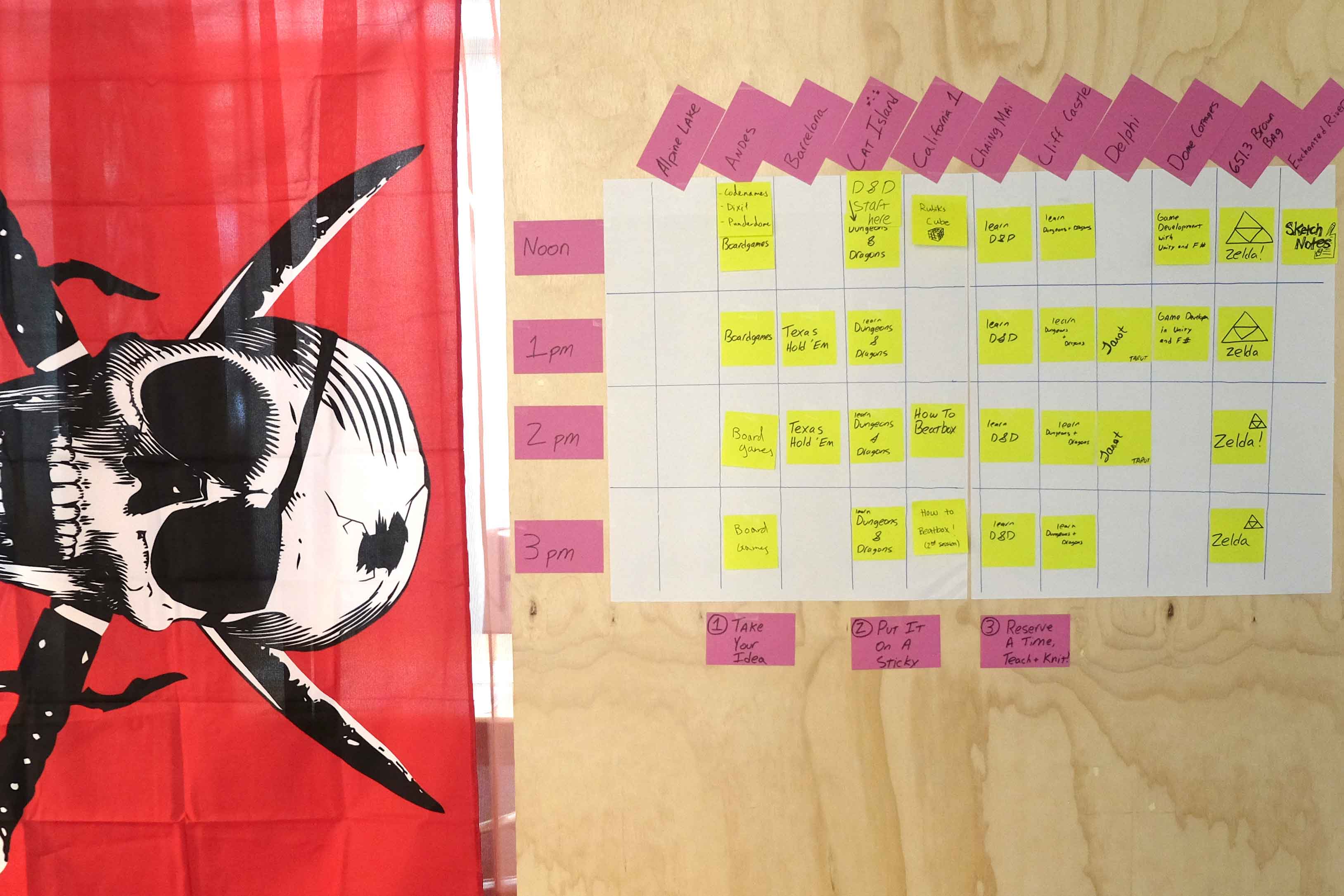 To top it all off, there’s a rousing open mic night kicked off with a full-on roast followed by execs reading mean Tweets. Once our hosts warmed everyone up, 25 employees took the stage to rap, rock, dance, baton twirl, perform stand-up comedy and more. 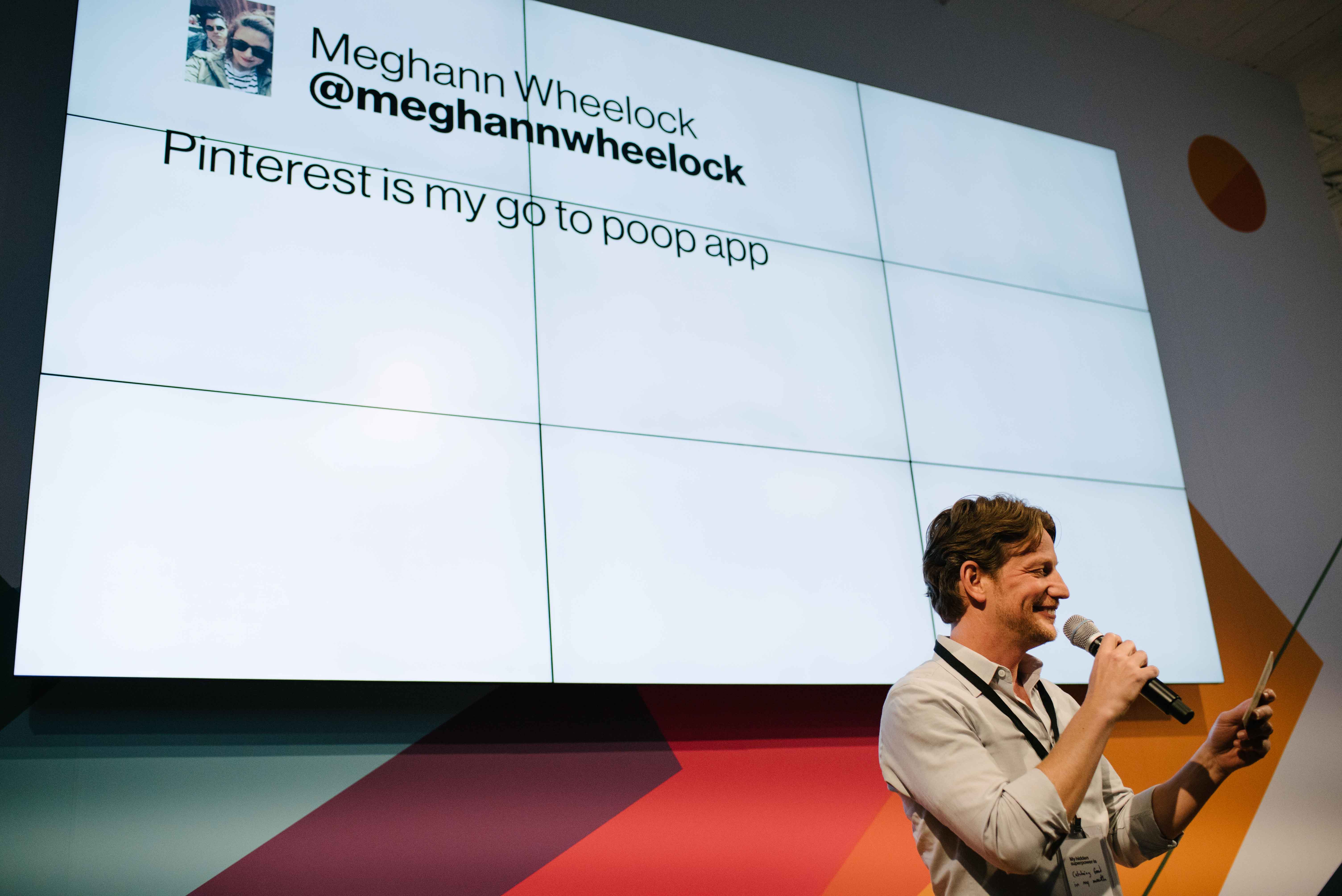 What an amazing two days. Here are a few quotes from my fellow Pinployees:

“Knit Con was an over-the-top expression of the most unique and cherished parts of our culture: trying new things, being inspired and appreciating the extraordinary people we work with everyday.”

“The past two days have been about self-discovery and rekindling my interests.”

“I feel reinvigorated and inspired.”

Our co-founder and head of product, Evan Sharp said, “Fulfilling our mission around the world in this ever-changing industry requires a culture that can both rapidly invent and rigorously build a playground and a factory. Doing each of these well, together, requires true creativity.” 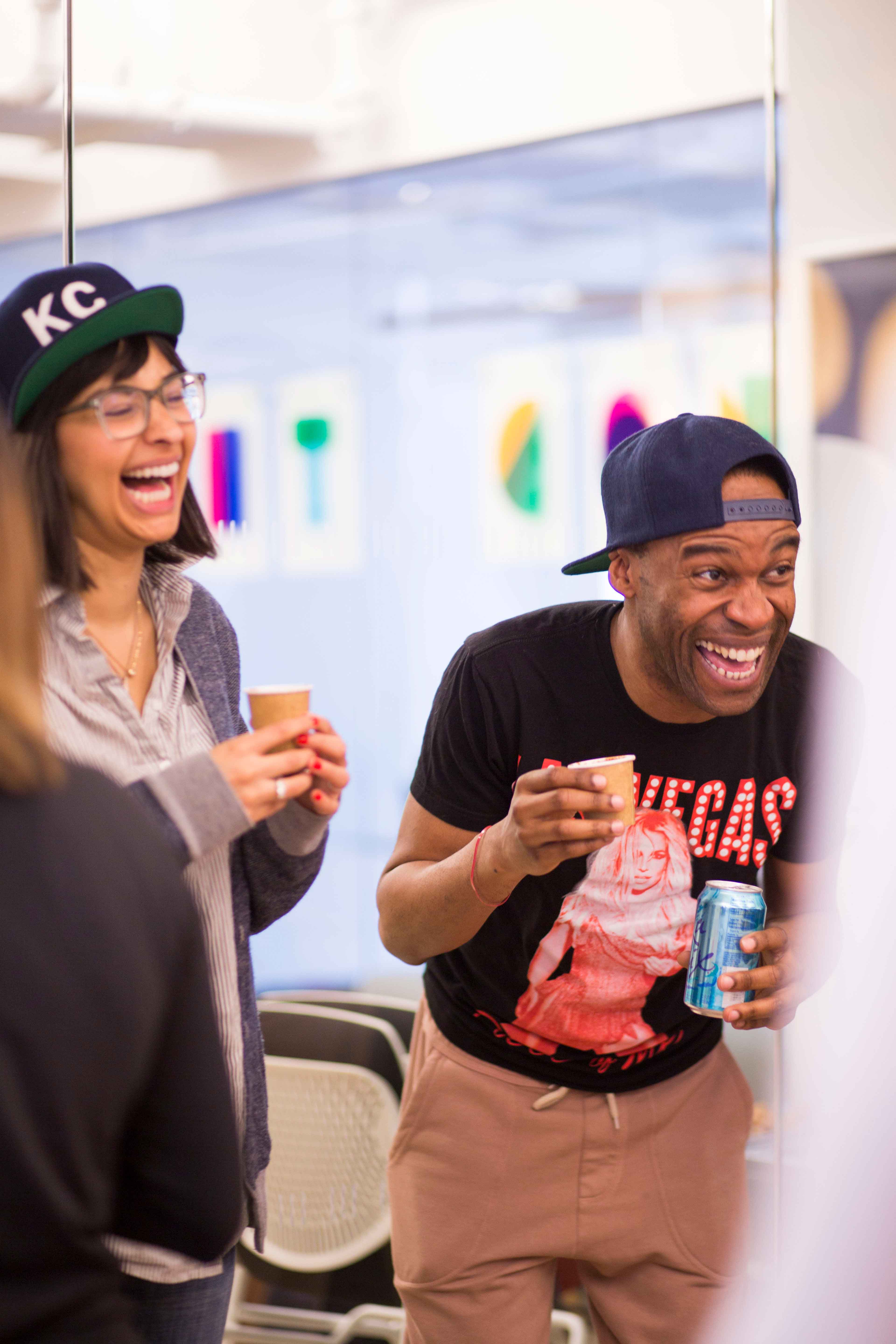 Raashi and Dejon in the NYC office 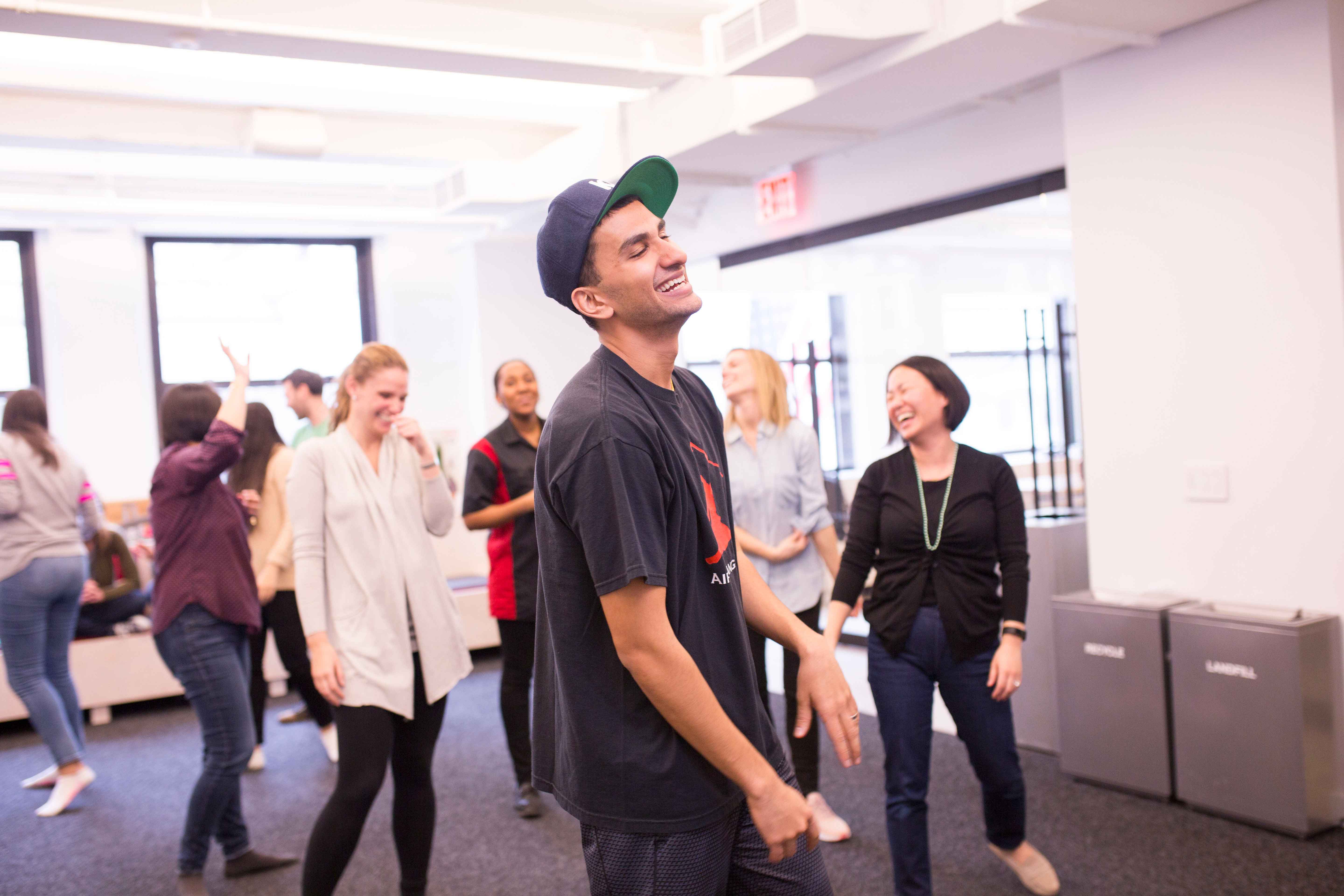 Whether you’re an engineer, intern or work in the Tokyo office, Knit Con breaks us out of our daily routine and brings us together. By sharing our talents and passions with each other, we inspire, spark innovation and encourage creativity and community. It’s only two days, but there’s a magic that happens that lasts long after it’s over. The spirit and positive energy lives on in every one of us, every day.

In her keynote, Mellody Hobson said to us, “You have the life that you want. You chose this. By choosing to be here, you can continue to make this company great.

I deliberately make this choice every day. I want to be at Pinterest, and it’s because of the amazing people I work with and the unique culture we’re creating together.

Special thanks to everyone who made Knit Con 2017 happen: Enid Hwang, Kacy Ashley, Laura Brunow Miner, session leaders and the open mic participants. You inspire me and I'm thankful that we're fostering Pinterest's culture together.